The Beursfoon KTM team made a clean sweep of podium spots at the second round of the Motocross European Championships on Kolding, Denmark. Ivano van Erp and Kay de Wolf won the 65cc and 85cc classes respectively, and Scott Smulders was second in the 85cc class.

The incessant rainfall leading up to the race forced the organisers to cancel Saturday’s  schedule. A shortened qualifying schedule was arranged for Sunday.

Ivano van Erp posted the pole time in the 65cc class. He was in sublime form and claimed both holeshots on his Hannamax KTM. He brooled no opposition  and won both heats comfortably.

In the 85cc class, Kay and Scott posted the fastest and second fastest times respectively.

In the first heat Scott’s Prox  clutch did its job, and he was third off the line. Kay had a lesser start, holding ninth initially. Scott bided his time and pounced for the lead when the opportunity came. He  fought hard, but finally  claimed second. Kay recovered to fifth, which kept his hopes of a good result alive

Both teammates got away well in race two, being first and second into the first corner. Kay flew into the lead and never relinquished it again. Scott held second for a while but a number of mistakes dropped him to sixth. The joint scores were enouh to reward Kay with the victory and Scott with second spot.

The next round of the European Championship will be held in Finland on 21 May. 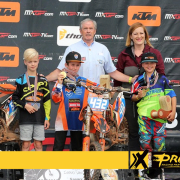 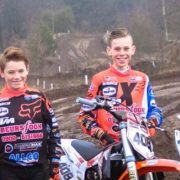 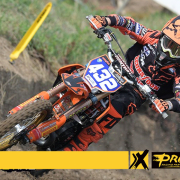