LAS VEGAS (May 7, 2017) – Monster Energy Pro Circuit Kawasaki’s Adam Cianciarulo earned his second win of the season in dominating fashion during the East/West Shootout at Sam Boyd Stadium, finishing over five seconds ahead of his teammate and newly crowned Western Regional 250SX Champion Justin Hill. Austin Forkner went down in the first turn and was able to come back for 12th, while Joey Savatgy was hit in the second-to-last turn and pushing him back to a 14th-place finish.

Adam Cianciarulo
It had been an up and down season for Cianciarulo, who broke through for his first race-win at the beginning of March. While that win was sweet after years of injury, his victory in Las Vegas was just as sweet after besting the riders from both regions on a difficult track outside the Las Vegas strip. Throughout the race, he was even in contention for the championship, but in the end his win propelled him into second overall in the Eastern Regional 250SX standings.

“This is something I’ve always wanted to do [win the east/west shootout],” said Cianciarulo. “I am going to have to go back and watch the whole race to see all the action that happened behind me but I was in a groove and just tried to keep pace the entire race. It feels amazing to end the season like this.”

Justin Hill
After already taking the championship two weeks ago in Salt Lake City, the race in Las Vegas was more or less a victory lap for Hill. With the temperatures over 90 degrees all day, Hill struggled with minor heat stroke, but was able to pull together for a solid showing once the sun went down. Like Cianciarulo, Hill got out to a great start and was able to maintain his lead-pack pace, ending the season with his eighth consecutive podium finish.

“I am so thankful for everyone that has supported me,” said Hill. “Honestly when I came into the weekend, the championship still hadn’t sunk in. I struggled a little bit with heat stroke today and wasn’t sure if I would be able to race, but came together for the night show and just tried to pace Adam. He rode great and I’m really happy to see him take the win.”

Austin Forkner
Forkner had been very consistent in Las Vegas as an amateur prior to his professional debut in Sam Boyd Stadium. He kept up the fast pace for much of the night, but a first turn crash would force Forkner to start from 20th. Despite the odds stacked against him he still managed to make his way back toward the top-10 in 12th.

“I felt really good tonight and was hoping to get on the podium or even a win,” said Forkner. “It will come, but though I rode well after that hard crash in the first turn. It was definitely tough and really got me excited for the upcoming outdoors season that starts in two weeks.”

Joey Savatgy
As a championship contender, Savatgy put himself in good position on the start, avoiding the pile up in the first turn. He was near the front-runners on the first lap, but had to catch back up again after a bobble following the finish line. He made his way back up to fourth, eventually having some issues that forced him toward the end of the top-10. Savatgy would ultimately be taken out in the final turn and forced back to 14th as he crossed the final finish line of the Monster Energy Supercross season.

“It was a rollercoaster season to say the least,” said Savatgy. “What happened on the last lap I didn’t see coming and should have. I would have probably done the same thing in that situation, but it hurts being on the losing end of a take out.” 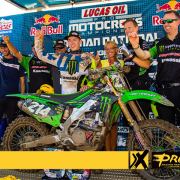 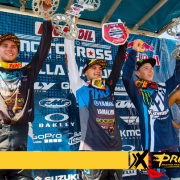 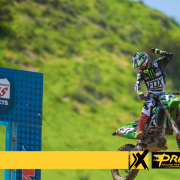 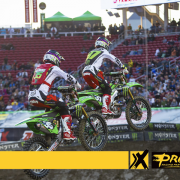