Corona, Calif. (January 29, 2017) – Prepared for another exciting round of the 2017 Monster Energy Supercross Championship, Justin Hill and Austin Forkner arrived in Arizona fit for battle. Motivated by last weekend’s positive results, the Monster Energy/Pro Circuit/Kawasaki team has been busy on and off the track dialing in their rides and prepping for battle. Their hard work paid off and both riders landed on the podium. Justin Hill’s victory marked the team’s 250th win and Austin Forkner’s 3rd place finish marked the rookie’s first professional Supercross podium.

Justin Hill
It was another great weekend for Justin Hill. In the day’s qualifying, he set the fastest lap times and kept the momentum going. In Heat 2, he easily took the number one spot and looked forward to the night’s final race. In the main event he stayed smooth lap after lap. In the final minutes, Justin made his move on the points leader, moving past him and taking the lead. Holding his position, he crossed the checkers in first for back-to-back podiums!
“I pushed hard and around the halfway mark. I knew I was inching up on the leader, I was hitting my marks and riding well. My mechanic was doing really well at getting me my times and keeping me up on where I was at. I dropped the lead down to about four seconds and then the leader tangled with a couple lappers and I reeled up on him and I thought, this is it, I’m going to do it! Even after the race I was talking with my family and still couldn’t believe I did that. I did it, it was so cool!”

Austin Forkner
Week after week, Austin Forkner continues to impress. The rookie rider was off to a good start in Heat 1. He took the holeshot and battled for the lead, and finished the heat race in second. In the night’s main event, he and his KX250F once again took the holeshot and competed for the number one spot. Throughout the evening, he stayed within the top three and pushed himself to remain there. At the checkered flag, Austin finished in third and experienced his first professional Monster Energy Supercross podium!

“The race was good. I rode a lot better than I have been, more consistent and didn’t make mistakes. I was really confident in my starts, back to back weekends I’ve earned both holeshots in the heat and main. With starts like that I knew I was going to be up there and thought if someone gets by I just need to relax, figure out what they’re doing better than me and use it to be better. I knew I needed to not make mistakes like I did in the heat where I cased the triple trying to pass someone back. I tried to ride smooth and fast, I’m really happy with how I opened the race and I held the lead for a few laps which is definitely the best I’ve done so far.” 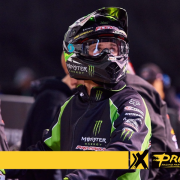 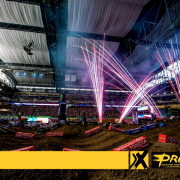 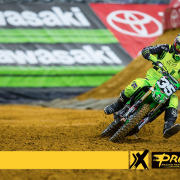 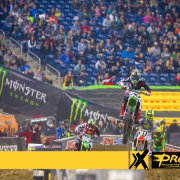 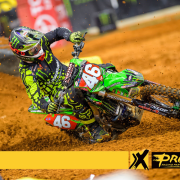