You are here: Home1 / San Diego 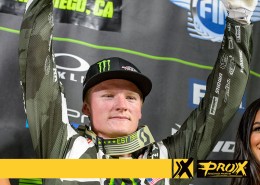 Corona, Calif. (January 16, 2017) – This past Saturday the Monster Energy/Pro Circuit/Kawasaki team arrived in San Diego fit for battle. The team entered round two determined to land on the podium and quickly got to work on this goal during the morning’s qualifying sessions. With seemingly effortlessly ease, Justin Hill set the fastest lap times aboard his KX250F. Justin took the win in the second heat race and teammate Austin Forkner took third. The team carried this momentum into the main event where Justin fought his way to a podium finish!

Fueled by the day’s achievements, Justin Hill entered the main with his sights on the podium. While riding among the leaders throughout the race, he waited until the final laps to really make his move. Making valuable passes, he pushed his way to the front of line, just seconds behind the leader. Justin crossed the checkers in second and found himself on the podium for the first time this season.

“My KX™250F was fastest though qualifying and I won my heat. I didn’t get a great start in the main but pushed for the entire race and earned second. It feels great to be back on the podium and after tonight, I know I can win.”

Austin Forkner
Austin Forkner entered Petco Park ready for anything that may be thrown at him. He displayed great riding in qualifying and during the second heat race. In the heat, he took the holeshot and rode among the top three throughout the race. Austin finished the heat in third and was fired up for the main. In the night’s main event, he fought to maintain his position. Never giving up, Austin Forkner crossed the checkers in fifth and remains motivated for the next round.

“We got a lot faster as the day went on. A few changes to the bike throughout the day lead to being able to loosen up and ride better. In the heat we got the holeshot and raced really hard for third. In the Main Event we had a great start but tangled with another rider and dropped back to eighth. I felt a little tight but made some solid passes and overall rode well. The lap times were competitive and we’re making progress, so we are happy so far.”