French teenager Stephen Rubini raced to his first top ten GP finish for the Monster Energy Kawasaki MX2 Racing Team in his home round of the FIM World MX2 Motocross Championship at Ernée.

The youngster had already impressed during qualification as he charged from twenty-fifth on lap one to finish twelfth and he continued the strong pace which he has developed during his rookie season in the first GP moto as he moved forward from an initial sixteenth to hold a secure ninth place throughout the second half of the thirty-five-minute race. Gating well in race two he held eighth place for the first three laps before running into the hay bales at the bottom of a long descent, an incident which cost him a dozen places; at the finish he had battled his way back to fourteenth to secure tenth place overall in the GP.

Darian Sanayei of Monster Energy DRT Kawasaki started the weekend well with a strong charge to eighth in the qualifying race, but his ride in the first GP moto did not reflect his abilities and he eventually had to settle for a fourteenth placed finish. Regrouping for race two the American was making rapid advances to twelfth place and had high expectations of advancing yet further but a crash left him stuck under his own bike and, remounting twenty-sixth, he again charged hard to finish thirteenth for twelfth overall. He is now tenth in the series standings.

Kawasaki MX2 GP regulars Seva Brylyakov and Petar Petrov were both absent; the Russian decided after last week’s German GP to pull forward his visit to a nerve specialist in Moscow to hasten the recovery of his shoulder injury before his home GP in two weeks’ time, while the Bulgarian accepted medical advice to sit out the French GP to correct an iron deficiency; he too expects to return in Russia.

Stephen Rubini: “I’m so happy to get my first ever top ten result, it was a very good weekend for me! I had a good feeling with the track, I like when you have bumps and ruts and I posted top twenty results in the practice sessions. I hit the gate at the start of the qualifying race but came back fourteenth, which was a good gate pick for the races. But my first start was not so great, around 25th or 26th and again I came back ninth, spending some energy to get this result. My second start was much better, but my race wasn’t as good as the first one; I lost control of my bike in the downhill and went in the hay bales, losing twelve positions. I came back fourteenth, but I felt tired after giving so much energy in the first race. It was a positive weekend, I enjoyed riding my bike and reach my first goal this season with a top ten, now we’ll continue to work hard to get some other top results.”

Darian Sanayei: “This weekend was tough. I got eighth position in the qualifying race on Saturday, which was actually a pretty good result for the way I felt. The warm-up today was good with seventh best time, but in the first race I struggled a lot; I didn’t have a good start and only finished fourteenth. In the second moto my start was not very good but I was moving up through the pack pretty quickly and got to twelfth until I crashed. I was stuck under the bike for a while; it sucks because I think I could have got a pretty good result. When I got back in the race I was twenty-sixth and made my way to thirteenth to salvage some important points. The track was really stiff, everybody was struggling, but it’s the world championship and we must have different tracks each weekend; it was still cool with the French atmosphere and everything.” 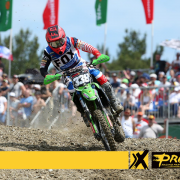 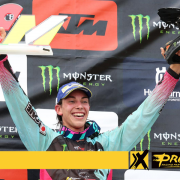 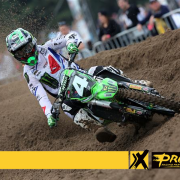